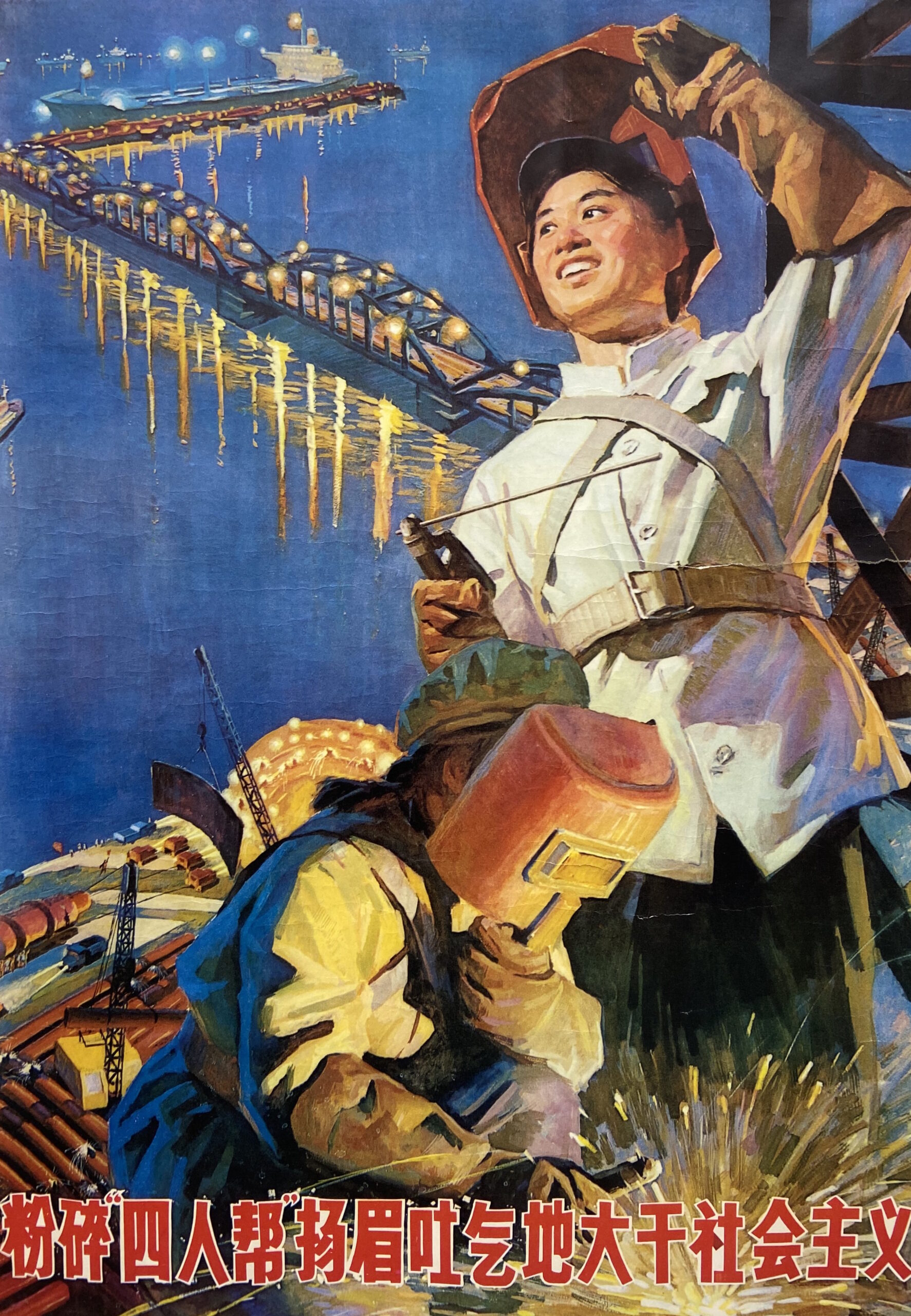 What comes to your mind when you think of Communist propaganda posters? Uplifting words colored in red? Inspiring stories trumpeting the party’s leadership? Or strategic rhetorics aimed at brainwashing people? At the first glance, these overly ecstatic messengers may not seem qualified to present the objective “historical truth.” Nevertheless, as this Cultural Revolution poster will show, propaganda posters can be a valuable primary source with enormous nuances and insights hidden between the party’s brushstrokes.

Titled Smash the ‘Gang of Four,’ and Proudly Build Socialism, this poster (held in Wesleyan’s East Asian Art & Archival Collection) was created in 1977 by workers at the Dalian Port Authority. It links the sharp drop in China’s industrial growth during the last years of the Cultural Revolution to the Gang of Four’s* attempt to incite workers’ unrest in factories.

The poster exhibits a classic element of its time with its portrayal of two female welders performing a job traditionally dominated by men. Because of the labor shortage caused by famine during the Great Leap Forward campaign, an unprecedented number of women entered the workforce in the 1960s and 70s. Utilizing extensive propaganda to mobilize women to work, the state also disseminated a new ideal for the female gender. While the Chinese state has played a pivotal role in formulating Chinese genders since the imperial times, the Communist regime’s gender doctrine was nonetheless the most radical.

Disguised as a progressive advocate for gender equality, the party actually deviated from the equality principle. Instead, it endorsed a process of xingbie mosha (gender erasure), advising women to show iron-like strength as a manifestation of their capabilities equal to those of men. It is important to note here that this policy of desexualization clashed with the traditional gender system that remained popular in rural China. Guided by the ideology of yin-yang, the established patriarchal system emphasized the innate differences between the two sexes and the different social duties they consequently carried, known as nan nv you bie. But during the Cultural Revolution, old systems were toppled for being backward and counter-revolutionary. As revolutionary participants, women were asked to significantly downplay their sexuality, effectively erasing femininity as it was deemed bourgeois – revolutionaries could only be masculine and coarse. Therefore, in this poster we don’t see the two workers display any apparent feminine characteristic. Nevertheless, viewers can still pick up certain subtle cues about the characters’ female identity. The squatting welder has a braid and the standing welder’s facial features, her eyebrows in particular, are not as sharp and hypermasculine as a typical male character.

The portrayal of masculine women in the Cultural Revolution propaganda prompts many questions, which I wish to answer in my thesis. What were peoples’ reactions toward the new gender ideals? Was there a shift in the power dynamic in the private sphere since women’s legal status was elevated? How did women negotiate with the official suppression of femininity and assert their agency? Despite the state’s rejection of female sexuality, was there ever a glimpse of hope for women to acquire an independent personhood when they became productive citizens?

Cataloging and researching the posters in this collection have provided tremendous historical insights. It amazes me that there is new information in every poster. Take this poster for example. Even though I was well aware of the revolutionary gender policy, I was still surprised to learn that as a result of mobilization of female labor, women actually occupied some of the most technically and physically demanding jobs, such as welding, during this period. Although hard labor often became a burden to women’s health, their grit and industriousness earned respect from others and affirmed their worth in society to themselves. The incremental progress these women made in claiming their agency, despite pressure from the state to suppress femininity, is a glimpse of hope and optimism in this otherwise gruesome chapter of Chinese history. To that end, I very much look forward to my future discoveries with the remaining 49 posters in this collection.

*The Gang of Four was a Communist political faction who came to prominence during the Cultural Revolution and was deemed as the major antagonist for their “counter-revolutionary” efforts that led to societal turmoil and atrocity.