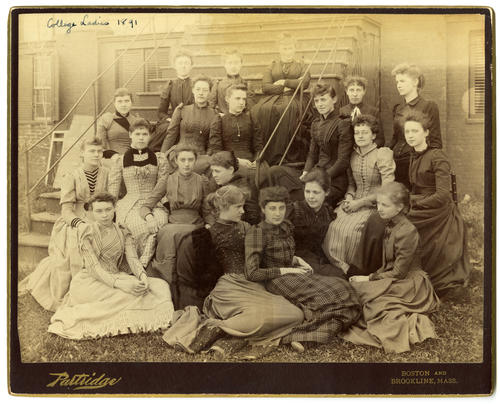 Nineteen young women in beautiful dresses are carefully posed by a photographer.  The rear entrance of their residence, Webb Hall, is in the background.  Their housemother keeps watch from on high, her arms folded in a no-nonsense gesture.  In the style of their day, the women are arranged in small, inward-looking groups within the larger image.  One woman’s arm rests on her friend’s lap, others lean on the women next to them, intimate gazes abound.  These are Wesleyan’s women students in 1891.  They’ve dressed carefully for the camera, each dress fashionable, unique, and lovingly sewn by hand.  W.H. Partridge, a prominent Boston photographer with studios in several parts of the city, traveled to Middletown to take the picture.  The women are identified on the back of the photo.

This image documents the early days of the peak of Wesleyan’s first period of coeducation, which lasted from 1872 to 1912.  By February 1909, the Board of Trustees had voted to end the admission of female students as of the coming fall.  Many factors were involved, but pressure from male students and graduates in the era of rising college athletics and alumni boosterism was paramount.  It was never easy to be a Wesleyan college woman in the 19th century. The women were often vilified by being referred to as “quails” – that is, suitable prey for the men.  But the period leading up to the end of coeducation was especially difficult for female students, who were largely shunned by their male classmates and prohibited from joining extracurricular activities.  In the early 1890s, however, the end of coeducation was in the unforeseen future.  Women of the time served as class vice-presidents, won significant numbers of academic prizes, and belonged to sororities.  There were enough women on campus that they had their own subculture within the larger student body.

“College ladies 1891” is part of the Coeducation collection in the University Archives.  The collection has been fully digitized and is available here.  It includes administrative memoranda, clippings from the Argus and other newspapers, correspondence, statistics, and other primary and secondary documents from a variety of sources.

In the Spring of 2007, visiting choreographer Ann Carlson and a diverse group of Wesleyan dance students created a series of tableaux vivants based on the lower righthand corner of this photograph.  Amid the hubbub of Reunion/Commencement, these contemporary women, dressed in carefully crafted replicas of the 1891 dresses, moved with an ethereal grace between campus locations where they re-enacted the poses in photograph.  As if in a dream, never breaking character, the dancers brought the past – as seen through the 21st century eyes of Wesleyan’s female student body – to life.  The performance was simply breathtaking.

This blog post is seventh in a series on ephemera in Wesleyan’s Special Collections & Archives, presented in conjunction with the Center for the Humanities’ Spring 2021 theme of Ephemera.  On April 12th at 6 p.m., Mimi Thi Nguyen (University of Illinois, Urbana-Champaign) will lecture on “Beauty’s Copy.”  Here is the full series calendar.