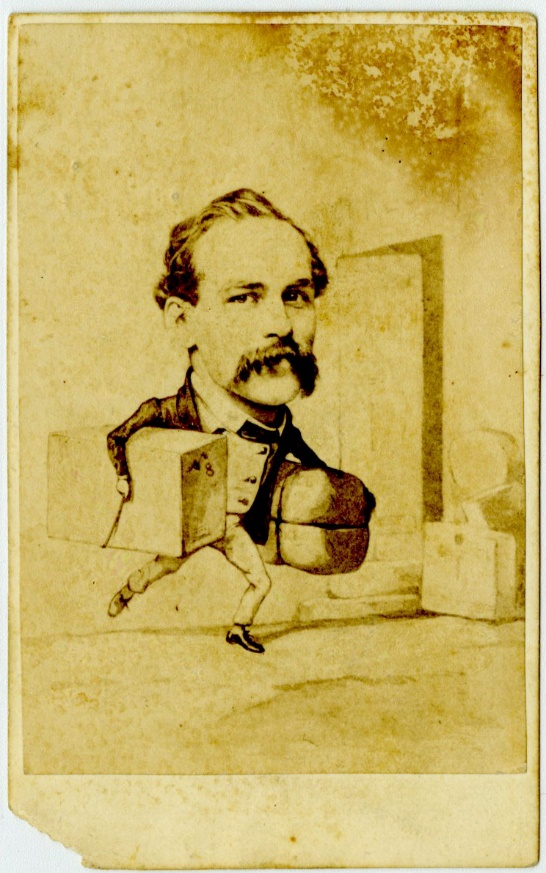 Cartes-de-visite, such as this clever little pastiche from the prominent New York studio of C.D. Fredricks, became commonplace in the U.S. in the period just before the Civil War.  Here, the giant photographed head of an anonymous man sits atop a pint-sized caricature of his body, the angle of his spindly legs echoing his spectacular handlebar moustache.  Perhaps a clerk or manager in a dry goods store or an importing business, the altered image is both amusing and archetypal.  Who was he?  We’ll never know.  But something in his face or his situation appealed to Wesleyan English professors Joe Reed (1932-2019) and George Creeger (1925-2014).

The Joseph W. Reed and George Creeger Collection of Human Likenesses represents decades of sporadic, whimsical, and serendipitous collecting, the pleasant pastime of scholars who were drawn to intriguing faces of the past.  Long before eBay made it possible to specify searches that yield hits all over the world, Joe and George poked around in antique shops and flea markets, tracking down the indefinable: faces that pulled them in for a closer look.

The Reed and Creeger Collection fills seven archival photograph boxes, numbering about 360 loose photographs, with another hundred or so in a 19th-century album designed specifically for collectors of cartes-de-visite.  A wide array of photographic processes and formats are well represented, including daguerreotypes, ambrotypes, tintypes, cartes-de-visite, and cabinet cards, among others.  The great majority of the subjects are anonymous and – apart from a few celebrity portraits in the album – those who are identified have been forgotten by history.  The collection was donated to Special Collections & Archives by its creators in 2012.

These objects open a window into the photography studios of the mid to late 19th century when modestly-priced portraits became accessible to the middle class.  Images were collected and exchanged, cherished and saved.  They became far more ubiquitous and easier to obtain than the visual imagery of earlier eras.  In collections such as this one, most of the images are divorced from their original contexts – the family albums, the tokens of friendship, the details of who, when, where, and why.  Those connections proved ephemeral, but the photographs still offer research opportunities to understand how people of their day presented themselves: how they dressed and posed, and what they wanted to leave behind.

This blog post is fourth in a series on ephemera in Wesleyan’s Special Collections & Archives, presented in conjunction with the Center for the Humanities’ Spring 2021 theme of Ephemera.  On March 8th at 6 p.m., Avram Finkelstein (Artist-Activist, Founding member of Silence=Death and Gran Fury) will lecture on “The Twenty-First Century Image Dilemma.”  Here is the full series calendar.