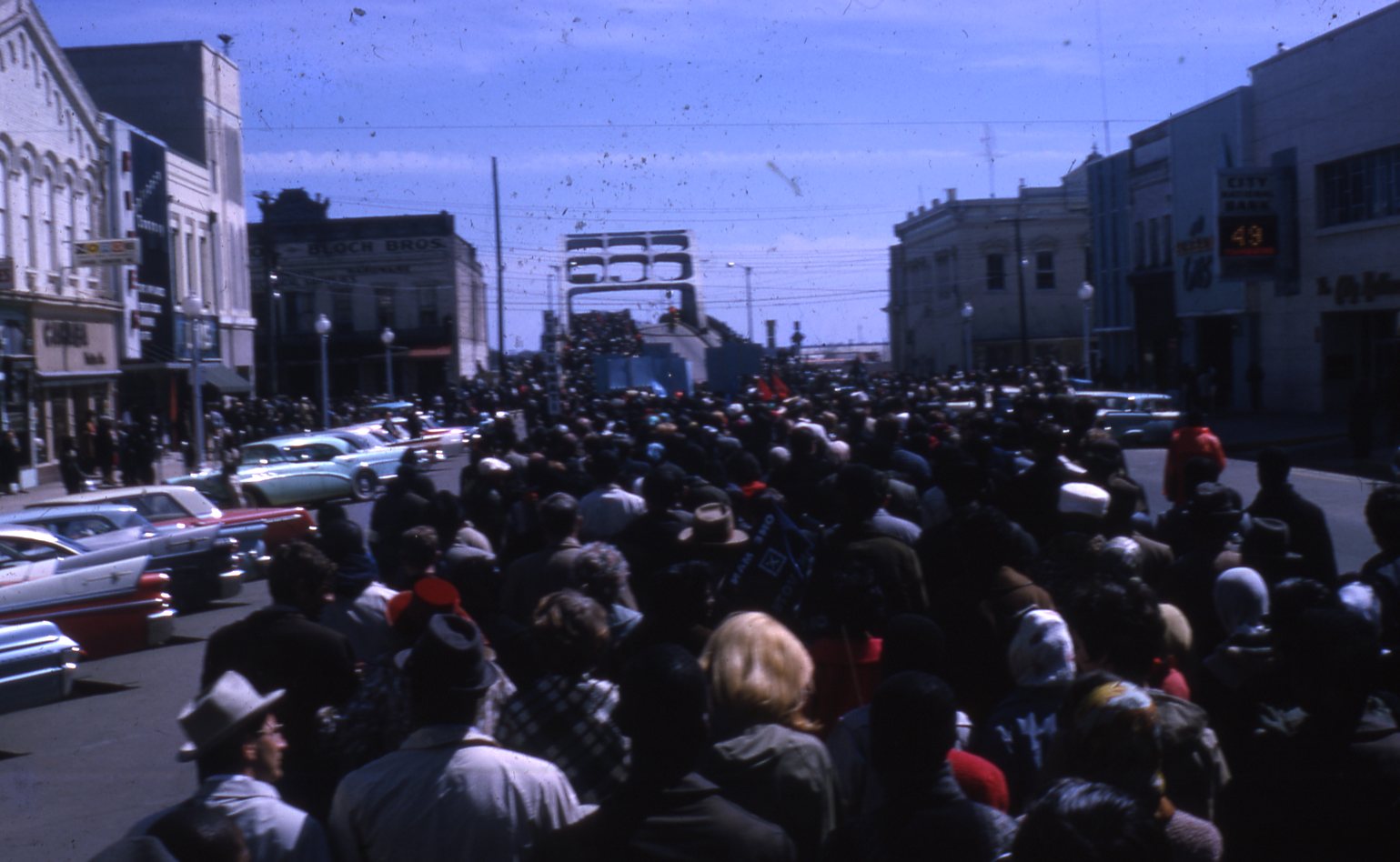 As we near the end of Black History Month, today’s archival discovery was pretty great. While processing material, a small box of slides was found with a label that made us pause. The yellow slide box said “Selma 1965”. A closer inspection of the material showed a set of color photos of the march on the Edmund Pettus Bridge in Selma, Alabama.

The slides were a donation from Grace Gibson Newcomer, whose husband, Sam Harold Newcomer was a faculty member at Wesleyan during the civil rights movement. Newcomer came to Wesleyan in 1964 as an associate pastor and director of the interchurch ministry to students. During his time in Middletown, Newcomer was director of Upward Bound, a federal anti-poverty project at Wesleyan as well as chairman of the Middletown committee for Freedom in Mississippi (a project which supported civil rights in Belzoni, Mississippi). This project saw Middletown become a sister city with Belzoni, bringing an African American student, Carolyn Williams to take a postgraduate (PG) course at Middletown High School. Carolyn would go on to marry Jerry Scott, a 1969 graduate of Wesleyan.

The Selma slides show how fascinating life in the archives can be and they speak to the importance of documentation. On March 7, 1965, the first attempt at the march across the bridge took place. What became known as “Bloody Sunday”, saw Dr. Martin Luther King Jr., John Lewis, and marchers halted by police forces despite the demonstrator’s peaceful protest. King called for action and reassembled the group to march again on March 9, 1965, known as “Turnaround Tuesday.” In order to not have the same violence that occurred a few days prior, King had the group stop once across the bridge, leading them in prayer before turning around as to not violate the restraining order that had been put in place after March 7th.

The slides have little information on them leading us not to know which date they are from and who everyone is. We can tell the images represent the Baptist church which was the meeting spot for marchers, the walk to the Edmund Pettus bridge and some photos of the Montgomery jailhouse. See below for a sampling of images from the collection (click on images to enlarge). This type of find is what is exciting about archives. The research possibilities are endless. This is just one small collection in our almost 10,000 linear feet of records. It takes a great amount of effort to not delve too far into the history of the items we collect and house. With limited time and numerous collections to maintain, we leave that work to the researchers, students and inquisitive minds that come through the doors of Special Collection & Archives.

Written by Erica Ciallela. Ciallela completed her MLIS from Syracuse University in 2019. She did her internship at the Special Collection & Archives at Wesleyan in the summer of 2019, staying on as a temporary archival assistant after finishing her degree.